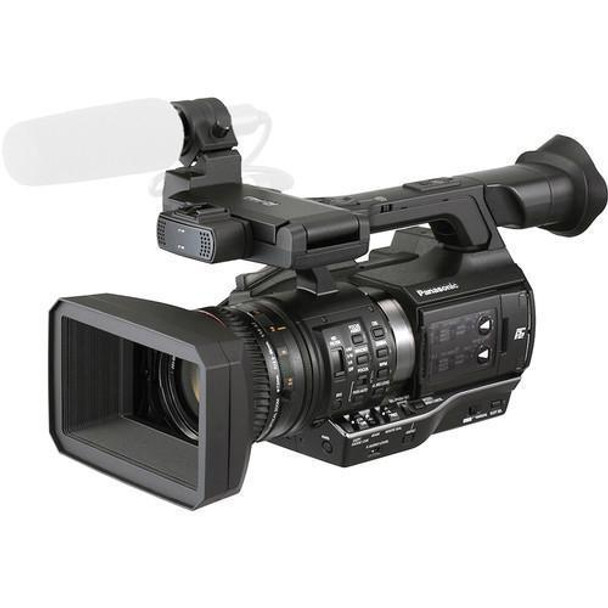 The AJ-PX270 is the first P2 HD handheld camcorder combining the high quality and incredible efficiency of low bit rate AVC-ULTRA recording and the flexibility of a 3G/4G/LTE wireless mobility. The 5-pound PX270 provides all the key functionality of the high-end, shoulder-mount camera (AJ-PX5000 P2 HD with AVC-ULTRA). It features newly-developed high-sensitivity, low-noise 1/3 type 3MOS imagers to produce stunning pictures, even in low lighting conditions.

With its innovative AVC-ULTRA codec, the AJ-PX270 features both low-bit rate and normal recordings. For high quality recording, the camera records in 100Mbps AVC-Intra100, as well as 200 Mbps AVC-ULTRA Class 200 (optional). For applications where file size is critical, e.g., for wireless feeds, the PX270 records in low-bit rate AVC-LongG for extended recording and AVC-LongG25 enables extended 1920 x 1080 10-bit 4:2:2 broadcast-quality recording (four times longer than AVC-Intra100 for the same memory space).

Networking functions are included as standard, and options are available to allow for proxy video to be automatically uploaded to the cloud and for compatibility with a planned cloud workflow, allowing immediate editing from a remote location.

The PX270 features a Wireless LAN function via an optional Wireless LAN dongle and supports the existing Panasonic live uplink solutions. Dongle support for wireless workflow over a mobile 3G/4G/LTE network is also scheduled for the near future. Thanks to these wireless features, users of the AJ-PX270 can easily uplink low-bit rate proxy data and full quality broadcast content. The handheld camera's network function makes the production work-flow more efficient and accelerates the broadcasting work-flow from shooting to on-air.

Two microP2 card slots enable the ultimate cost-effective operation. The microP2 card, with the same reliability as the P2 card, can be used without an adapter
Other Key features:

Panasonic developed the new CX Series of handheld camcorders, spearheaded by the AG-CX350, to fuse video, on-air broadcasting, and communication for the next generation. The AG-CX350 features 4K/UHD...

The CR-X300 features a 1 / 2.3-inch 4k-UHD CMOS imaging sensor and an optical 20x zoom lens, along with the a 20x digital zoom, all supported by Canon's highly advanced autofocus technology...

Canon's CR-N500 PTZ camera produces outstanding image quality and is equipped with powerful features and functions to be utilized in many industries including House of Worship, Education,...

Canon’s RC-IP100 controller provides control for up to 100** supported cameras*. Additionally, through the serial port, the RC-IP100 can control one compatible Canon camera via the NU protocol...

Canon's CR-N300 PTZ camera produces outstanding image quality and is equipped with powerful features and functions to be utilized in many industries including House of Worship, Education, Broadcast,...

Ace M is exclusively available as a package with a 75 mm tripod and a useful transport bag. Anybody who works on uneven ground and “on location” would have an advantage with the two-stage...

Panasonic developed the new CX Series of handheld camcorders, spearheaded by the AG-CX350, to fuse video, on-air broadcasting, and communication for the next generation. The AG-CX350 features 4K/UHD...