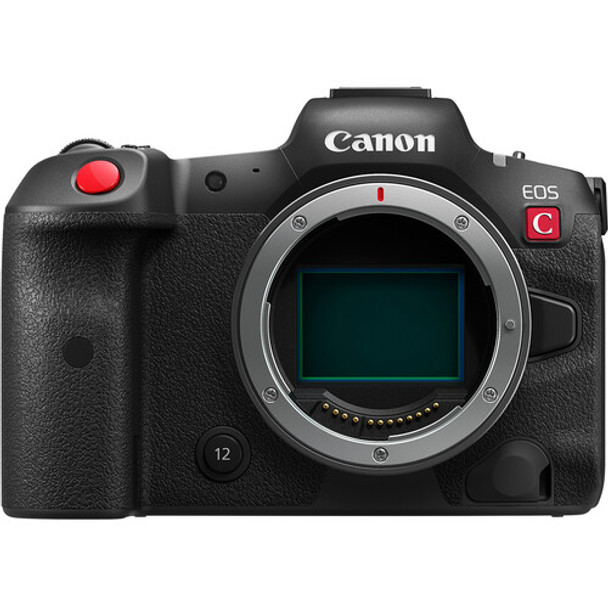 Compact and lightweight, the EOS R5 C is a true hybrid camera, boasting many of the video formats and features from the Cinema EOS lineup as well as many of the still-imaging capabilities of the EOS R5 camera in a beautifully designed body.

The EOS R5 C is a complete package that offers filmmakers, multimedia journalists, and advanced amateurs a cost-effective 8K, 4K, and FHD video camera to help unlock their creative potential.

Focus and speed are paramount in the EOS R5 C camera, providing impressive still-image continuous capture at speeds of up to 20 frames per second, and with Dual Pixel CMOS AF II capability, to track split second movements of even the most elusive subjects. With 1,053 Automatic AF zones, it is easy to photograph people with the use of Eye, Face and Head Detection AF, or intuitively track the whole body, face or eye of cats, dogs, or birds with Animal Detection AF. For those with the need for speed, Canon has also included still-image vehicle subject detection to assist with accurate tracking of cars and motorcycles. Connectivity like 5GHz and 2.4GHz Wi-Fi® and Bluetooth®, is also included for the transfer of still imagesi .

As soon as the EOS R5 C's main switch is moved to the "video" position, the familiar Cinema EOS menu system and interface take over. Expected high-level video features such as waveform monitors, video codec options, and extensive audio control become available - greatly expanding the EOS R5 C's video potential for the experienced camera operator or video content creator. During “photo" operation, menus are nearly the same as on the EOS R5 camera.

The 8K sensor and DIGIC X processor produce high-quality video at up to 8K/60P. Use of the Cinema RAW Light format with its high-efficiency mode enables internal card recording without an external recorder.

The EOS R5 C camera features a cooling fan built into the body, forcing out the heat from inside. This enables continuous and virtually limitless shooting of high-definition 8K/60P video without interruption.

The EOS R5 C camera provides a Timecode input/output terminal for easy synchronization when shooting with multiple cameras and other interfaces. A cable protector is also included as standard to prevent cable disconnection or damage to the terminal if strong force is applied when connecting interface or HDMI cables.

Carries on the Ergonomic EOS Design

The EOS R5 C camera's body design is incredibly compact and lightweight. When paired with a Canon RF lens (or EF lens using the Mount Adapter EF-EOS R), it offers outstanding performance that fits easily and comfortably in your hand, making handheld shooting a breeze whether shooting video or still images. Its Electronic Viewfinder is optically extended, for eye-level viewing similar to the conventional EOS R5 camera, and it uses the same ergonomic grip design.

The EOS R5 C camera is designed with operational flexibility in mind, conforming to each individual professional workflow, including 13 marked, assignable buttons that allow for user-friendly customized operation.

The EOS R5 C camera reads out signals for all effective pixels from its full-frame 8K sensor, enabling 4:2:2 10-bit high-definition recording through oversampling during 4K and 2K video recording. A high-definition debayer algorithm has been included and the 4K generated from the abundant RGB data of the 8K sensor enables more refined imaging capabilities with less incidence of moiré, false colors, “jaggies” and noise.

The EOS R5 C camera supports RAW output via HDMI and ProRes RAW recording with compatible external recorders such as Atomos devices*. By connecting the EOS R5 C camera with a supported external recorder, users can shoot in Apple ProRes RAW at up to 8K 30P. Proxy data can also be simultaneously recorded to an SD card in-camera, providing efficient post-production operations.

Amazing for shooting scenes full of fast-paced action, the EOS R5 C camera's fast and intuitive autofocus remains enabled even during HFR recording, making it ideal when shooting from a gimbal or drone, delivering outstanding focus accuracy at HFR or at common frame rates.

Unlike some other cameras where audio is not recorded during HFR shooting, the EOS R5 C camera can record .WAV audio as a separate file from video, virtually eliminating the need for separate audio recording and delivering HFR video and audio files in one convenient device when shooting slow motion or fast motion video.

The EOS R5 C camera features Canon Log 3, which is found in many Canon cameras and works with multiple Canon EOS and Cinema EOS cameras. The wide dynamic range can be used for a wider range of grading after shooting. Canon Log 3 is a gamma that is designed for simple grading, such as tightening dark areas and adjusting tones. It carries on Canon Log's ease of use with less noticeable noise. It can also be used when shooting with other Cinema EOS system cameras such as the EOS C300 Mark III and EOS C70 cameras.

Enhanced image stabilization is achieved through coordinated control when Canon's RF lenses with optical IS are combined with the EOS R5 C camera's electronic IS when shooting XF-AVC or MP4 formats. With an RF lens that has optical IS and the electronic IS in the EOS R5 C camera, coordinated control helps achieve the optimum hand-shake correction effects. This helps achieve better anti-vibration performance than with conventional IS-equipped EF lenses (using optional Mount Adapter EF-EOS R) and electronic IS together.

With most Canon RF and EF lenses, AF for video can be carried out over approximately 80% of the vertical and horizontal area of the screen. Touch AF allows positioning an AF point by simply touching the LCD screen, in addition to quick manual positioning with the 8-way Multi-controller on the rear of the camera.

In addition, the camera features Eye AF/Head Detection AF, developed with the use of deep learning technology to improve subject tracking. It also provides human detection (eyes/face/head), allowing it to track subjects accurately even when AF control is not available.

Users can track focusing as desired depending on their subject or shooting situation. A wide variety of AF modes enable autofocus shooting that flexibly responds to the subject's movement. Users can leave focusing to the camera and concentrate on their camera work.

What's in the box.

MSRP:
Now: $2,198.00
Was:
Login to view price or
email us for a quote
The FX30 captures beautiful cinematic imagery with 6K oversampling, high performance and highly efficient workflow. Enjoy hassle-free shooting with S-Cinetone™ and S-Log3 for high level grading...

MSRP:
Now: $5,099.00
Was: $5,399.00
Login to view price or
email us for a quote
Canon's CR-N500 PTZ camera produces outstanding image quality and is equipped with powerful features and functions to be utilized in many industries including House of Worship, Education,...

MSRP:
Now: $5,099.00
Was: $5,399.00
Login to view price or
email us for a quote
Canon's CR-N500 PTZ camera produces outstanding image quality and is equipped with powerful features and functions to be utilized in many industries including House of Worship, Education,...

MSRP:
Now: $2,399.00
Was: $2,699.00
Login to view price or
email us for a quote
Canon's CR-N300 PTZ camera produces outstanding image quality and is equipped with powerful features and functions to be utilized in many industries including House of Worship, Education, Broadcast,...

MSRP:
Now: $4,499.00
Was:
Login to view price or
email us for a quote
The XF605 Professional Camcorder features a Canon 1.0-inch 4K UHD CMOS image sensor capable of 4K UHD video capture at 60p and slow motion recording up to 120fps in Full HD, making the camcorder a...

MSRP:
Now: $763.00
Was:
Login to view price or
email us for a quote
Meet Poly Studio, the premium USB video bar built for small rooms and big ideas. Delivering the best audio quality in its class, it blocks distracting sounds that can interrupt meetings. Teams on...

MSRP:
Now: $117.61
Was:
Login to view price or
email us for a quote
Lens hood for Alpha SAL135F18Z lensFeatures Lens hoods are essential when taking pictures where the camera is pointing towards a strong source of light (i.e. the sun, spot lights). Protects the...

MSRP:
Now: $368.00
Was:
Login to view price or
email us for a quote
Get sharp detail up close with the world?s smallest and lightest 30x zoom camera. There's even a pop-up electronic viewfinder for eye-level framing and a 180 Degree tilt screen for 18.2MP selfies...

MSRP:
Now: $23.00
Was:
Login to view price or
email us for a quote
Mount Your Action Cam to Your Helmet and get exciting video of all your adventures. With tilt and roll adjustments you'll be able to capture ideal angles. Use the included leash and buckle lock for...